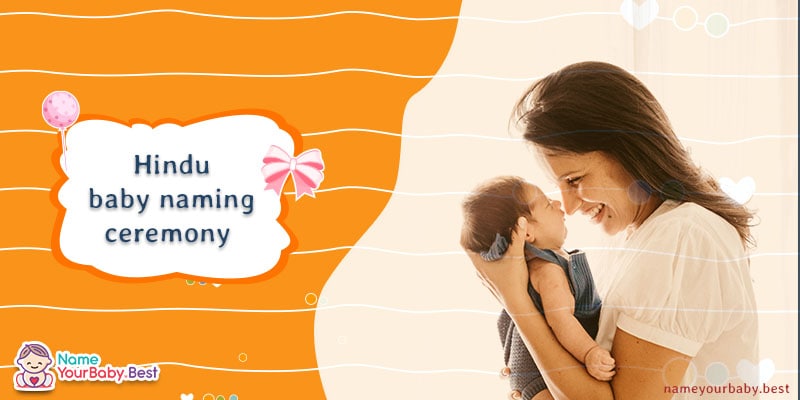 It is so exciteful, being the parents of a new born baby. Heartfelt congratulations to you for becoming the parents of the little champ. We wish and pray for all the happiness in upcoming years. Cheers to the new beginning! Now, it’s high time to perform the Hindu baby naming ceremony of your adorable son. And finally now the wait is over. Naming a baby, being the most enthusiastic as well as the most confusing part for the parents. Namkaran can be termed as “ nam means name” and “karan means to create.”

“There are words in the soul of a newborn baby, wanting and waiting to be written.”- Toba Beta

As per Hindu culture, the tradition of naming a baby is known as Namkarana or Namkaran. It is a naming ceremony performed to select a name of the baby, as per the astrological rules. Usually, this Hindu Baby Naming Ceremony is performed on the 12th day after the birth of a baby. People in varied regions perform these rituals as per their tradition. It differs from various localities, communities and regions. In Kerala, this naming ceremony is known as Noolukettu and is arranged on the 28th day. Similarly, in Nepal the naming ceremony is called Nwaran.

How is the Namkaran ritual performed?

Namkaran ceremony is generally followed by the parents, taking blessings from the family members. After carrying out Jatakarma, which is to be done immediately after the birth, this hindu baby naming ceremony is performed. As these days the birth of a baby is done in hospitals, this ritual is rarely conducted. Honey and Ghee is fed to the newborn baby by the father during this ceremony. Grandfather or uncle carries out these rituals, if father is not present.

Namkaran, being started with mantras and prayers by the priest. For a healthy long life and to protect the child, havan is also performed. Prayer is done by the priest to the God Agni, the fire of God, the elements and the spirits of the ancestors. Along with chanting the name of God, grains of rice are spread on a bronze dish and with the help of a gold stick, father writes the chosen name on the dish. Name of the child is then whispered by the maternal or paternal aunt in the child’s right ear four times. The family members and friends shower blessings on the child and give various gifts. Family members give gold or silver coins, ornaments, cash etc. and many even prefer to give the things which are useful to the child such as prams, winter wear, clothes etc. After the ceremony, a feast is arranged for family members and friends.

In some communities, various other ceremonies such as cradle ceremony and ear-piercing ceremony are also carried out. In the cradle ceremony, the child is placed in a decorated cradle in a unique way, also called ‘Palanarohan’. In the ear piercing ceremony, first a dot is to be put at the place, the ear is to be pierced. A doctor or goldsmith expert in piercing is to be called for piercing the child’s ear.

Child’s horoscope is also presented by the astrologer. It is given on the basis of time, date and place of the birth of a baby. Based on this chart, astrologers suggest various names which are best suitable or would give a syllable to start a name with. Hindus believe in naming a child after the name of Nakshatra or birth star. One can also check the Nakshatra on the astrological sites if you have the right time, place and date of the child.

Parents select the name based on the syllable given or either after the name of God and Goddesses. Names are also given from Hindu mythological stories like Ramayana and Mahabharata.

Based on five different principles, it determines what the initial letter should start with.

If you are new parents and looking for baby names, choose from the huge collection of our Hindu baby boy names or Hindu baby girl names

Scroll back to top
Go to mobile version